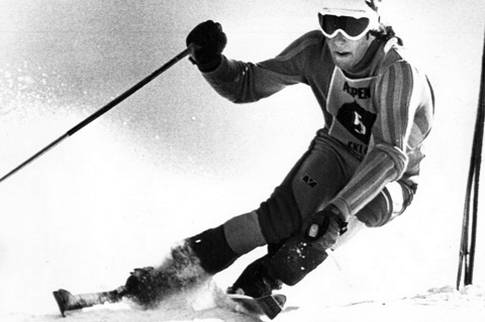 I believe in blazing new trails, not only finding paths travelled by others. This is not a contradiction to my point that it helps to look in other boxes rather than outside the box. We need to do both. 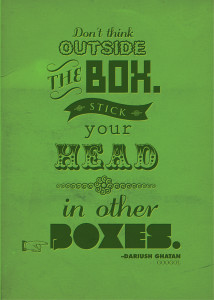 While looking at what others have done in wildly different industries can enable free thinking and innovation of new aspects of the delivery model, finding our own ways can dramatically change our chances to actually get things done as well as turning the rules of competing up-side down. Let others inspire you to the “what”, and change the “how”- so to speak.

Doing both; studying and finding inspiration in what others do and radically changing the game plan of how we do things need to be balanced in terms of resource allocation and risk. Here is were lean comes in. Finding the resources and controlling risk can be done through agility, not through hierarchies.

We need not re-organization, we need to de-organize

During the Innovation In Action 2013 symposium I concluded in my final presentation that we needed to find completely new ways of working. Going to the de’s rather than re’s; de-organize rather than re-organize, de-struct rather than re-struct. Finding new forms of organizational structures is core to succeeding with this ambidexterity. That is; Agile organization forms. Rather than building hierarchies for delegation of work and responsibilities, mostly achieving complexity and report driven activities, we should focus on building motion so that tasks can responsibly be taken and achievements made the main focus. I also touch on this in my post on avoiding Taylorian systems.

Or as Professor John Kotter puts it in the article found in The Huffington Post “Rules and procedures that inevitably accompany hierarchies almost never change fast even if they are now irrelevant, overly burdensome, and the like.”

We want success at the right level of risk. Success is not always immediately measured in ROI (return on investment), it could rather be discussed as strategic- and financially direct or indirect results. And of course, the value derived from these.

Risk can be taken into account in many aspects here. Cost, time, timing and likelihood comes into direct play. Complexity to market, competitive advantages follow direct after. Preceding these are by all means competence and resources. And let us not forget luck!

“..the more I train, the luckier I am”, Swedish slalom hero Ingemar Stenmark is claimed to have said. Now, Stenmark was not only wise he was also more diligent in his work to achieve outstanding results. He gained balance, strength and a never ending focus on achievements. I take this into account as I contemplate organizational structures. 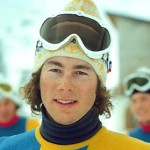 One aspect is that the lighter the team structure, the faster we can act, the sooner we can decide on new routes. So, another effect with agile and light team organizations is that cost of failure tends to decrease. Another important aspect is that the more teams gain experience, the better they can parry unexpected events. So, with speed, ability to parry and a bit of strong legs, agile teams can manage their way through slippery and icy slopes. When we find ways to delegate responsibility to teams, ask for achievements not reports, we’ll see accomplishments improve as well. Look at the start-up structures. They can’t afford big failures, they can’t afford management structures, they can’t afford inefficient structures. Their natural organization around this is the agile team structure. We can use this in our large organizations as well. It will bring creativity to value creation. Innovation will be reached.

In 2003, former Googolian Mattias Rydberg coined the expression; “Are you innovating or innowaiting?” 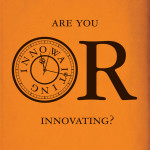 We know that risk aversion will lead to organizations eventually lacking the ability to take daring initiatives. The cost of this, eventually, is likely be the full value of your operation, whilst the comparably small cost of innovations going south, could even be transformed into valuable learnings.

So my opinion is that the cost of failing to innovate is larger than the sum of the cost of failed projects. In organizations were failure is not treated as a result, rather as a scenario that didn’t work; failures tend to be a turning point. Perseverance in the process and an ability to trust the process, will be a key success factor. Try new routes, find new ways. Entrepreneurial spirit in its essence.

To blaze on, there are a eleven conclusions from this text. A few of many out there. 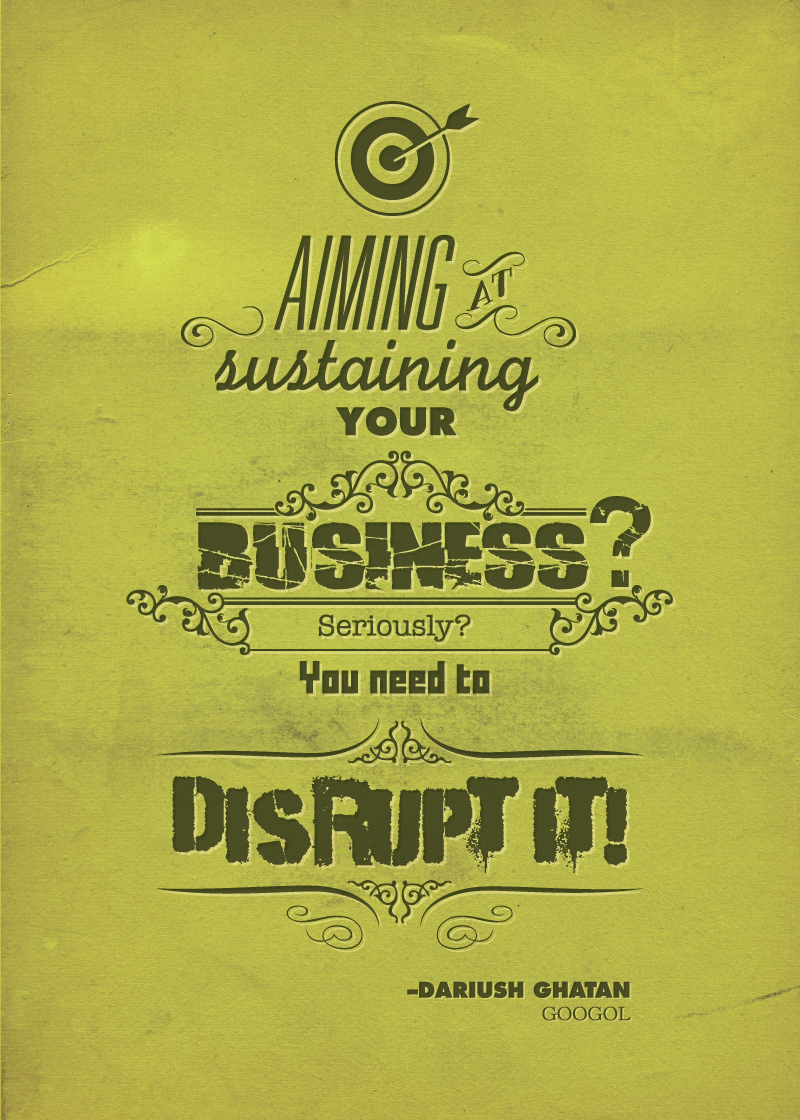 In todays inspiring conversation with Mikkel Bondesen of Ufuse, I found myself again discussing the need to tear down the Taylorian models of constructing hierarchies. Actually, not only tear down, we need to remodel how we work within our organizations. We are slowly destroying the ability to create new business. As we say, there is no business, like No Business.

A few years ago I spoke quite a bit about the commonalities of Innovation hurdles in the organizations I had had the opportunity to work with. I explained this as the effects of a stroke. The damage of the stroke itself, being usually one of the hurdles, makes little difference in itself. However the swelling around this damage will likely for ever destruct the power and ability of the brain. It is the same factors that come into play with an organizations abilities after the first damage of size has been done. The fault in itself might be of insignificant value, but the long term effects will slowly rotten the business of doing business.

A non performing culture can be recognized as an organization only thinking big, demanding big, expecting big and therefore betting big. There is nothing proving that this strategy of betting big forms a working portfolio in itself. Betting often, fast and confident can be better.

Projects also need to iterate in a creative process and must be allowed to establish its form over time, as value is added from different stake-holder insights.

Another item Mikkel and I clearly agreed on was the way hierarchies form uncertainties though the reporting and decision making. By not allowing people to see the full picture, yes- we create a organization that will ship at high efficiency, but it will not deliver new initiatives nor drive new revenue.

Taylor meant that workers were not intelligent enough to understand the work they were involved in. Well, it’s the 21 century now. Things might have changed. And actually, they probably did understand, but didn’t know how to express it.

Mikkel said that he finds organizations where

And he is right. That is exactly what todays organizations often suffer from. The answers are there, the process to find the answers are not. This is were the need of facilitated Innovation, a little help from externals, will help.

I told Mikkel that I find it gruesome to see that many organizations don’t even have more than a left hand (or a right). I do remain   in my strong suggestion that organizations should have both a left and a right hand and that, as you know, should be ambidextrous. I say;

Many talk about sustaining their business. That’s not enough. There is no business, like No Business. We need to continiously redevelop ourselves and dare to be- and seek the disruptive. 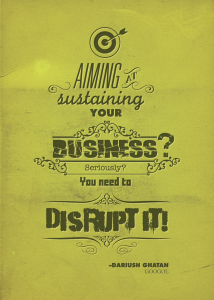 At Googol we are no working to develop further models for organizing the tasks and work force in streams of solutions. This we have found, will enable organizations to be more agile and anticipate their clients needs and respond to these in good time. We will during the symposium Innovation In Action 2013 in workshops such as Ambidextrous Organizations, held with Prof Bengt Järrehult of SCA and  me, as well as within workshops such as Big Data and Portfolio Management touch on the Why, the What and the How of this. Together this is how you form what I call a Zero-Time Company. More about this shortly.